I was talking to a friend of mine, non Nuwaubian, and who have very little knowledge of what went on regarding the case of Dr. Malachi Z. York.  A very interesting point and questions arose from this conversation.  The women who testified against Dr. York, these grown ass women who testified against Dr. York received immunity for their so crimes they committed.  Apparently these women testified in court that they brought and offered children to him for the purpose of sex.  And that they also engaged in unlawful sexual acts against minors or children.  Is that what they received immunity for?.  And because of their testimony their illegal acts and crimes became immune to any legal consequences or legal punishments.  But if these women have been involved in child molestation acts for over 5, 10, 15 years or maybe more, ARE CHILDREN SAFE IN THEIR PRESENCE?  Did they received any type of psychological help?  Were they legally forced to undergo psychological treatment by the court system who gave them immunity?  If they live in your community, would you feel threatened?  Because the system have created a tracking device or programs for sex offenders.  Are they considered sex offenders?  Should they be treated as sex offenders even though they received immunity?
You must asked yourself, Why are sex offenders even tracked anyway?  Because they have the tendency to re-act their crimes.  And if these women have been involved in child molestation acts for many years, do they also posses the tendency to commit child molestation acts?
No comments: Links to this post

Whats Up with Sinkholes Appearing Around the World

Recently, I've been hearing on the news and on the web about these sinkholes appearing around the globe.  Of course not all appeared at the same, but this year certainly.  I don't know about you, but I definitely find it very odd.  There must some geological explanation, other than blame it on the weather, soil corrosion, or whatever. 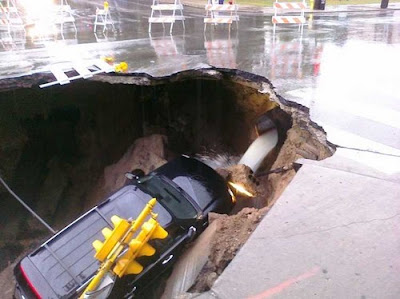 JULY 24, 2010 in MILWAUKEE, WISCONSIN
Milwaukee Sinkhole 2010 – Heavy rain caused a lot of problems in Milwaukee on Thursday, one of them being the twenty foot deep sinkhole that swallowed up several large objects. One of the things that it swallowed was a Cadillac Escalade SUV. The driver of the vehicle named Lance Treankler luckily escaped uninjured, although the outcome could have been an entirely different, tragic story.
JULY 24, 2010, in HUNTINGTON, WEST VIRGINIA
If you are planning on crossing the Fifth Street Robert C. Byrd Bridge or driving on Huntington’s Fourth Avenue, you will have to make some route adjustments.  On Friday afternoon a large sinkhole opened at the intersection of Fourth Avenue and Fifth Street. The hole has potentially destabilized most of the roadway which is located near the bridge.
JULY 23, 2010 BIRMINGHAM ALABAMA
ALDOT has drilled down about 40 feet so far. Still, they have to go another ten feet. "If the weather cooperates and the other findings as we continue to escavate look okay to us. We should have the sinkhole filed and traffic shifted back to normal patterns by the end of next week. Hopefully we will not be closing any more lanes." Harris said.  origin of article
OCTOBER 2009, HOPKINS COUNTY, KENTUCKY
The Kentucky Transportation Cabinet is repairing a sinkhole in southern Hopkins County that has caused headaches for drivers along Kentucky 2171 over the last eight months.  The hole appeared in October 2009, taking up an entire lane.  Traffic has had to be pushed over to the shoulder of the road to avoid the hole.   Engineers are still studying to see what exactly caused the hole to form, but the Transportation Cabinet says the sinkhole was more than likely caused by coal mining tunnels,which are all over the region.  Transportation crews plan to make additional repairs to the road in two weeks. In all, repairs to the hole are expected to cost almost $50,000.  origin of article
JULY 24, 2010, WESTCHESTER, CHICAGO
If one family embodies the aggravation of 2010's stormy summer, the Lewandowskis of Highridge Avenue in Westchester very well may be it.  Their odyssey started with basement flooding on June 23, when the Chicago area, and western suburbs in particular, were battered by fierce storms and rain. Two days later, after clearing and cleaning their finished basement, the Lewandowskis noticed that their beloved backyard lilac tree was being swallowed by an acrid sinkhole.  Their brief investigation concluded that a collapsed sewer line was the source of the sinkhole. The village was called and officials agreed that the line needed to be replaced. They scheduled a crew to do the work. origin of article
JULY 27, 2010, SAVANNAH, GA
A sinkhole appeared Wednesday near the intersection of Warner and West Bay streets, according to Savannah-Chatham police.  About 2:30 p.m., several motorists called to report the growing hole on the 600 block of Bay, near Yamacraw Village.  The hole appeared to be about 2 1/2-feet wide by 8 feet deep.  No injuries were reported as a result of the sinkhole, said Gena Moore, metro police spokeswoman.  origin of article 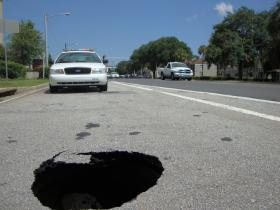 Email ThisBlogThis!Share to TwitterShare to FacebookShare to Pinterest
Labels: sinkholes

What a lot of people don't know is that Jacob York, who played a major part in his father's imprisonment, was raided by DEA and FBI prior to Dr. Malachi Z. York's arrest.  I believe that he made some sort deal with the FBI to help prosecute his very own father in exchange for his freedom.  Watch the video below.

He's very own friend Basil, also known as Damon Pryor, admitted to helping Jacob York commit fraudulent activities.  Basil stated that he was helping Jacob fraud checks to show that he has more money than it looks so he can buy a house.  What a fraud!  If you aint' got it you just ain't got it.

Ques:  What cause Jacob York to go against he's father?
Ans:  According to Abigail Washignton, the prosecutor's main witness is because he thinks, Dr. York is responsible for his mother's death.

I personally think is because Dr. York didn't baby him that's why he's having a child like behavior.  and retaliated against his father.
No comments: Links to this post

Many wants to know why the Rev. Dr. Malachi Z. York pleaded guilty.  But what many doesn't know is Dr. York agree to a PLEA BARGAIN AGREEMENT.


What was the Plea Bargain Agreement?
The Agreement between the prosecutor and the defendant was, Dr. York was to serve 12 years and 7 years mandatory.  And for the government to release the other 3 women that were arrested with him.  But the presiding Judge Hugh Lawson, disagreed with the term.  and said that, it wasn't enough time for the crime that he committed. At that point Judge Lawson was acting as if he was the prosecutor.  He already sees Dr. York as a guilty man and his judgment was already clouded.  That was considered biased on the judge behalf.   He just assumed that Dr. York was guilty and should be given more time.  But the prosecutor agreed to the term or the Plea Bargain.  And so the judge recused himself from the bench.  and now Judge C. Ashely Royal presides.

But what a lot of people don't know is that Dr. York wasn't suppose to be given a Plea Bargain in a Federal hearing not before a trial.  That is where the government messed up.  and they know it.  And to clean their act was to NOT AGREE to the Plea Bargain Agreement, they couldn't honor that.  Attorney Adrian Patrick explains it further in the following video.

Ques:  So, did Dr. Malachi Z. York pleaded guilty?
Ans:  He sacrificed himself for the freedom of others as he always have.  and for that he is an honorable man. and indeed a GOD.
1 comment: Links to this post