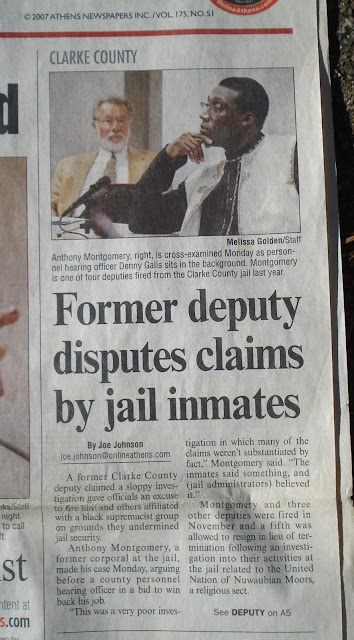 This is what BLACK DEVILS do.  You know what you suppose to, can do and can't do as a police officer, as law abiding citizens, and specially one who upholds and enforce the law.  But Black Devils like Anthony Montgomery, pictured above do stupid shit like this to draw attentions to Nuwaubians and makes Nuwaubians looks bad, ignorant and arrogant.  BLACK DEVILS! 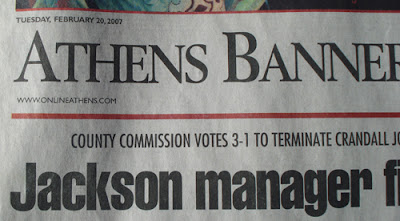 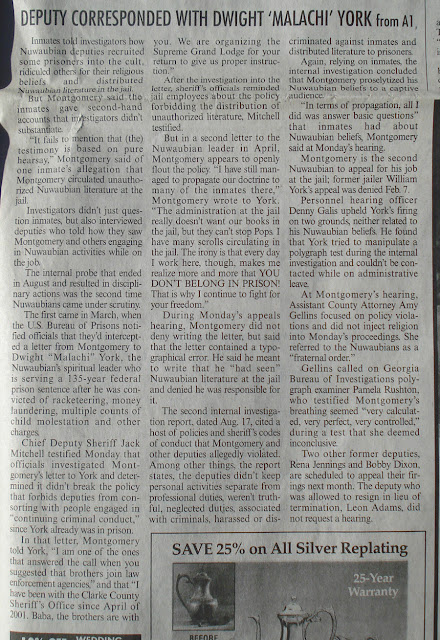 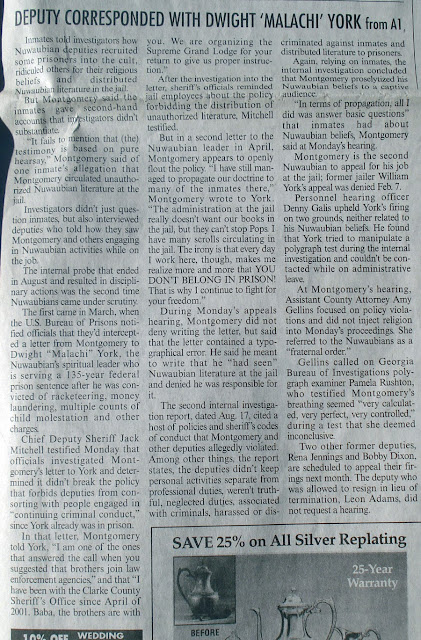 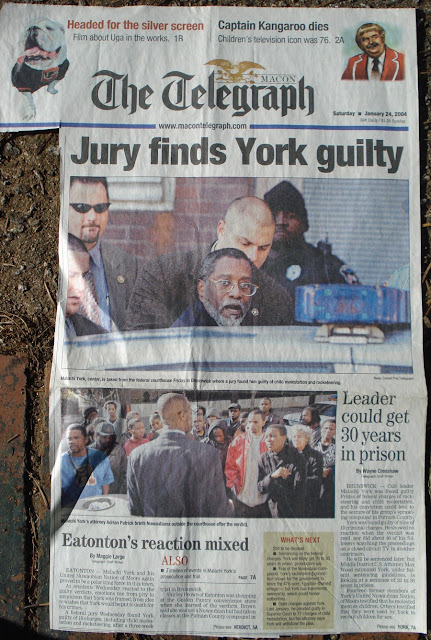 Jury Finds York Guilty
This is a newspaper clipping of January 24, 2004 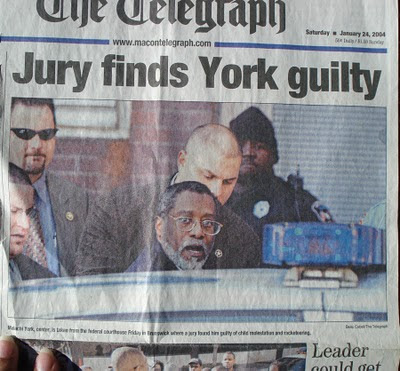 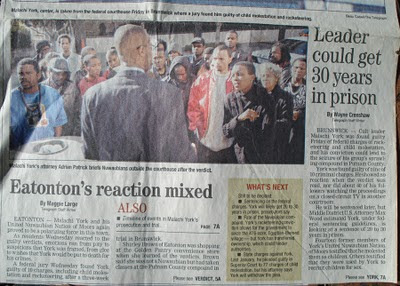 What they don't tell you in these articles that there was a hung jury.  And the judge enter the chamber, and the judge probably scared the black lady (the jury) and when he came out of the chamber the "guilty" verdict was placed over the Hung Jury.
These are my newspaper clippings I have saved and sharing to the world.  If you would like to share your clippings and maybe helpful to people who are working on Doc's case or research, email your digital copy to me at aeoebookstore@gmail.com.

Notes:  I take digital pictures of my newspaper clippings, as sometimes too large to scan on my scanner.  and I take my images outside to get a clearer and brighter photo.
No comments: Links to this post

This is a newspaper clipping of the January 26, 2003, the day that Dr. Malachi Z. York was offered a plea bargain of "Guilty", by the prosecuting attorney Richard Moultrie.  The offer consisted of 15 years maximum prison, and that the government agreed to free the women that were arrested with Dr. Malachi Z. York.  But the presiding judge Hugh Lawson, disagreed with the 15 years term and stated that he felt that it wasn't enough.

Anyway read for yourself what these Tamhus "Living Filth" are saying. 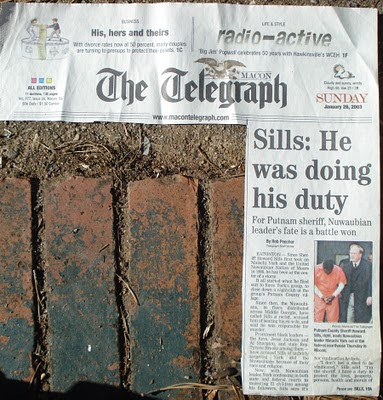 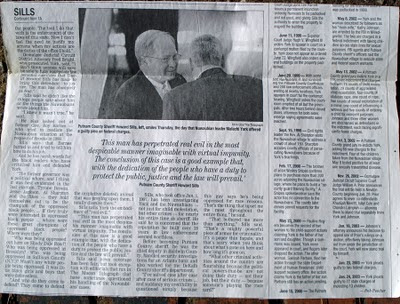 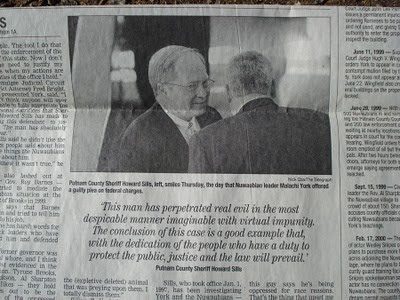 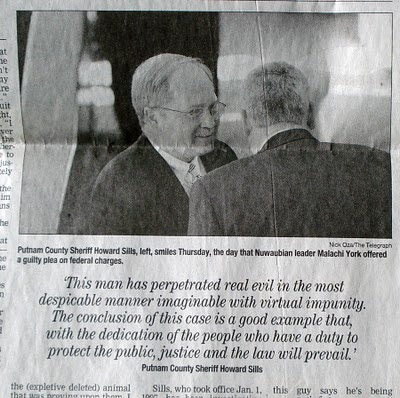 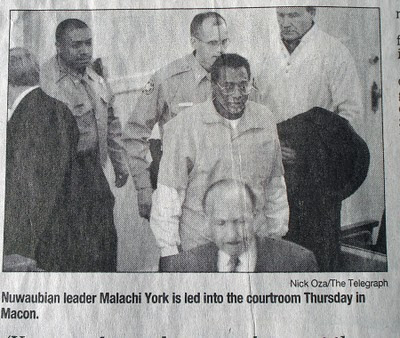 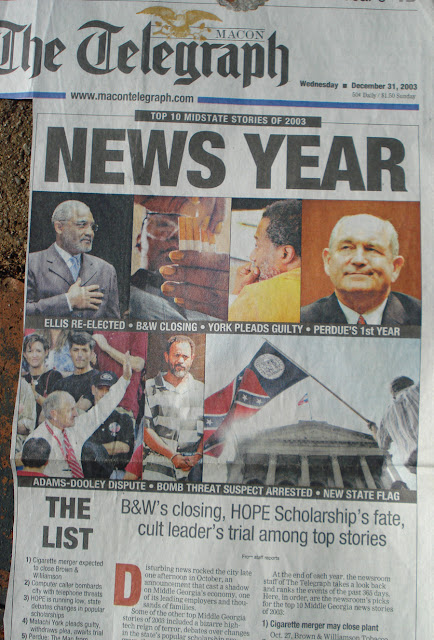 
They are always try to use Dr. York as much as possible on their newspaper cover to sell their paper.  But rarely find facts about Dr. York's case.
These are my newspaper clippings I have saved and sharing to the world.  If you would like to share your clippings and maybe helpful to people who are working on Doc's case or research, email your digital copy to me at aeoebookstore@gmail.com.


Notes:  I take digital pictures of my newspaper clippings, as sometimes too large to scan on my scanner.  and I take my images outside to get a clearer and brighter photo.
No comments: Links to this post

Nuwaubian leader pleads not guilty to all 208 molestation counts
by Don Richeson
Putnam County Sheriff Howard Sills places a hand on the left arm of shackled Nuwaubian leader Dwight "Malachi" York (above) as he guides him out of a Putnam County Courthouse sides entrance Friday.  Deputies assisting him include clockwise from left, Lee Wilson, Russel Blenk, Clint Perrin and Renaldo sanders. 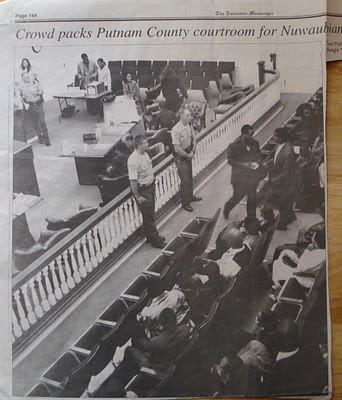 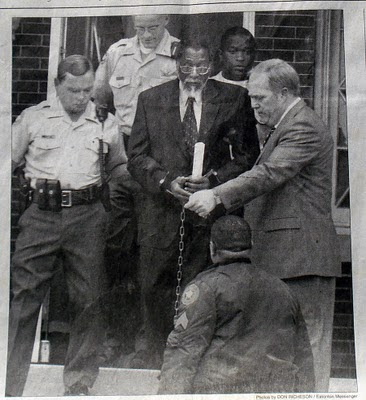 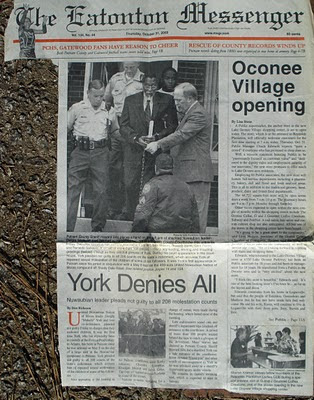 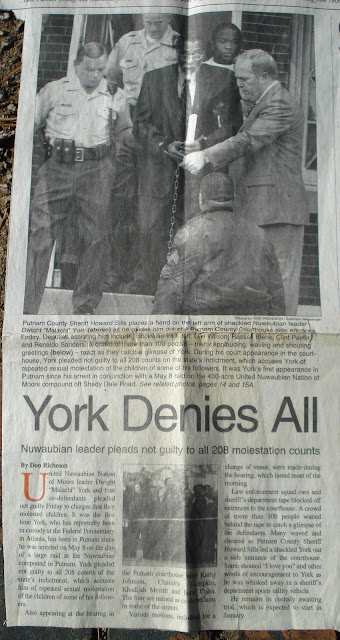 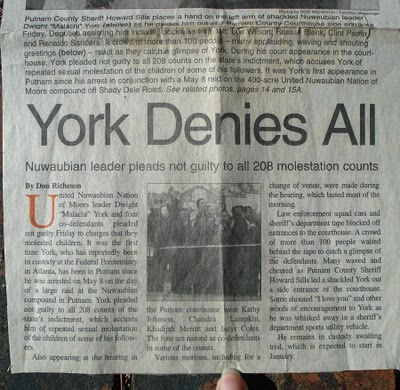 This is a newspaper clipping from The Eatonton Messenger on October 31, 2002
Notice how they had Dr. Malachi Z. York in the courthouse on Halloween.
These are my newspaper clippings I have saved and sharing to the world.  If you would like to share your clippings and maybe helpful to people who are working on Doc's case or research, email your digital copy to me at aeoebookstore@gmail.com.


Notes:  I take digital pictures of my newspaper clippings, as sometimes too large to scan on my scanner.  and I take my images outside to get a clearer and brighter photo.
No comments: Links to this post

Don't buy shit from this website.  As a matter of fact don't even visit them.  They suppose to sell e-books by Dr. Malachi Z. York.  Which I have no problem with.  But the problem is they don't have a phone number you can call, in case of any transaction problems.  Well I wanted the black book.  which they are selling for $25.00 so I bought like a dumb ass!  and I got HUSTLED for it.  It's the black book all right.  But they added REALLY BIG across each page their website.  and so when I printed a copy, because I don't want to ruin my eyes by staring at the computer all day reading the book.  the their freaking logo is going across on each   page.  So I wanted my money back or requested another version without their logo.  At first they said it would take a few days.  Few days pass by and I got an email from them saying just pick another book.  WTF!!!!  If I wanted another book I would have purchased that book.  I want what I paid for.  Buy anyway.   DO NOT BUY FROM THEM!!!! BESIDES i DON'T THINK THEY ARE THE ADMINISTRATION ANYWAY.  THEY'RE JUST TRYING TO MAKE MONEY FROM DR. YORK'S BOOKS.  And because of that I refused to support them any longer and I am going to buy my books from www.aeoebookstore.com

And for any of you'll who want a free copy of the e-book I purchased... here it is for free.  CLICK HERE
1 comment: Links to this post

Over 2000 UFO Sightings in Jerusalem in the past 10 days 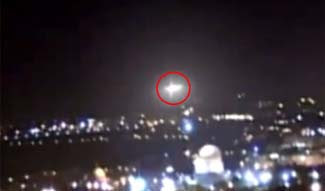 JERUSALEM – UFOs have been spotted over the Dome of the Rock – an ancient Islamic shrine!
Ever since violence has erupted in Egypt there have been numerous sightings of UFOs over Jerusalem, particularly over the Dome of the Rock – and ancient Islamic shrine.
Israeli, British and American intelligence agencies have confirmed over two thousand UFO sightings over Jerusalem in the last ten days.
“These UFOs are real. The videos that were shot of the UFOs are the most incredible videos ever shot,” said UK Ministry of Defense UFO investigator Nick Pope. U.S. Secretary of Defense, Robert Gates, said “this confirms what the U.N. and our intelligence agencies have been tracking for the last several months – there is an ongoing alien invasion occurring around the globe.”
Some skeptics believe the UFOs are really aircraft belonging to the Israeli army, some believe that they are high-tech drones. “Nonsense,” said Israeli General, Avi Meade. “The spaceships that we have observed, and videotaped, hovering ove
r the Dome of the Rock are the much more advance
d pieces of technology than anything created by man on Earth.”

The U.N. Panel on Extraterrestrials issued a statement late today. “This is final proof that aliens exist and are attacking Earth. We must come together and fight them.”

But why are the aliens flying over the Dome of the Rock — an ancient Islamic shrine? Flying above the shrine is strictly — forbidden.

Professor John Malley of the U.N. Panel on Extraterrest
rials said, “the aliens are clearly upset with the recent developments in Egypt. They are sending a message: resolve this conflict or we will resolve it for you.” 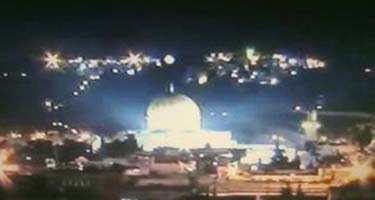 WWN has reported extensively about the ongoing alien invasion that has been documented to begin in early 2011 and continue until 2015 – when the whole world will be under alien control. Governments around the world are trying to cover-up the invasion in any way they can. But, the U.N. Panel is trying to counter act this propaganda campaign. 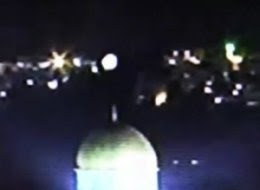 “The alien invasion is under way. Jerusalem is just the beginning,” said Professor Malley.

Here are two clips of the UFOs over Jerusalem:

Knowledgeable but Dumb as hek!

Is it me or does it seems like Nuwaubian Men are knowledgeable but dumb as hell?  First and foremost, this is not pointing all of the Nuwaubian men or brothers.  But I've been in Right Knowledge since 1995.  And I've met a lot of brothers and sisters.  There are very few Nuwaubian families.  And majority of them are from the ansaars.  Maybe back them it was more family oriented than it is now.  But anyway, it seems like brothers' just want to sound deep.  It must be an ego thing.  There are just a bunch of talk!  They have knowledge, but lack wisdom.  They talk about white men this, and white man that.  But they don't set good examples for their children.  Seriously, how many brothers you know right now, that are Nuwaubians, got kids by Nuwaubians and they're not in the same household as their children.

Anyway... I just want to point out that... having knowledge does not make one WISE!

I don't want to go anyfurther... because you know me... I'll start dishing names out there.
No comments: Links to this post