I thought this was a pretty good report on how Judge C. Ashley Royal was soooo biased.  If you ever had a chance to read any of the pre-trial minutes, you will surely see exactly how biased and one sided Judge C. Ashley Royal was when it came to Dr. Malachi Z. York's child molestation case.    But what's more interest about this article is, it clearly shows how Adrian Patrick really had the balls and the nerve to go up against this crooked judge and his crew.  Attorney Adrian Patrick is straight up a warrior.  As the article begins:

"BRUNSWICK - Fireworks erupted Friday in the federal child molestation trial of cult leader Malachi York when his defense attorney angrily accused the judge of bias for the prosecution and asked that he remove himself from the case.  ..."

according to the article Attorney Adrian Patrick accused the judge of making "IMPROPER SUGGESTIONS"  to assistant U.S. Attorney Richard Moultrie.  Read the pre-trials minutes and you will see more "IMPROPER SUGGESTIONS" made by Judge C. Ashely Royal.  But I really have to give two thumbs up to Adrian Patrick.  Not only did he had the balls to fight these tamahus, they under estimated his intelligence.  Attorney Adrian Patrick was only given six days to prepare for trials because he was denied of continuance.  and was forced unwanted assistance of Attorney Manny aurora from the Garland Firm by Judge C. Ashely Royal.

That's 6 days.  Attorney Adrian Patrick was only give 6 days to prepare for a federal RICO trial but was heavily promoted as a CHILD MOLESTATION case. 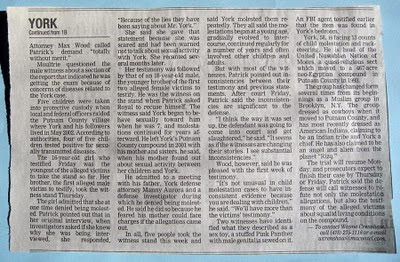